Skateboarding’s influence on mainstream marketing over the decades has been absurd. Every small detail about skating that we cling to and feel passionate about has been bastardized and monetized thousands of times over. (We’ve said it before and we’ll say it again: Skateboarding is hot, hot, hot.) But digital design maestro Barton Damer has flipped the script, bringing a skater’s eye to not only some of the world’s most well-known companies, but also brands endemic to skate. His multimillion dollar 3D design studio is ABC, and their output is NBD.

Over the past ten years, skaters have seen Damer’s striking work for Vans, Organika, Street League, and New Balance Numeric (to name a few). The firm’s latest project, for The Berrics x Cariuma Catiba Pro collab shoe, premiered this morning. We have to say: the video looks like a million bucks. Learn about Damer’s background (FYI, he started out by making skate videos back in the day), and what it takes to build an award-winning design team, below:

When did you start ABC, and what inspired you to use the classic joke about used gum for the acronym?

I began ABC back in 2008 as a design inspiration blog. The goal of the blog was to try to inspire others by posting “hot and fresh” work that I would come across. Of course, I would sprinkle my work in there as part of the strategy to get it out there.

The name actually comes from skateboarding. What’s the first thing you ask a filmer when you go to a new street spot? What’s Already Been Done? It’s typically frowned upon to double up and accidentally film the same trick someone else did at the same spot. So as an artist, it’s a personal challenge to keep things “hot and fresh”… and not regurgitate the same design tricks over and over. Already Been Chewed seemed more memorable and allowed me to play with food puns for the copywriting. “Guaranteed Fresh. Served Hot Daily.”

At what point did you start to do work for skate brands?

In 2010, I decided to quit my job and go out on my own. The blog was doing quite well and my Google [SEO] was really high… so I kept the name and transitioned it over to my personal portfolio site. At that time, I was freelancing with various skateboard brands on night and weekends. I was working with brands like Supra, and the Kayo brands (Expedition, Organika, DGK, and Gold).

How has the pandemic affected your daily workflow? Do you pitch clients via Zoom or…?

We’re located in Texas, so everything has been remote for us from day one. When I was a solo freelancer, all of my work was coming via social media and making a name for myself. My first Nike project was landed via Twitter! But I will say one of the Pandemic Perks is that Video Chat has become the norm. This has really opened up brands to look outside of the typical LA or NYC studios. We’re doing a lot of work this year with brands located in Italy and Singapore.

It’s way more common to land work remote than it was 9 years ago when I cold emailed Rob Dyrdek. Not only did he answer back, but we’ve worked with him on everything from Street League to Fantasy Factory and Ridiculousness, which also led to Disney/Star Wars and Mickey Mouse projects! (Below is a video from shortly before the pandemic started that tells that story.)

Can you give me a good example of how a winning visual idea becomes fully formed at ABC? What’s the brainstorming trial-and-error process usually like?

It’s really a team effort. While I may be the one developing the initial creative concept, I think it’s really important not to box the team in so that everyone creatively contributes to the part of the project they were working on and it becomes a full team effort.

Our entire team shares a lot of common interests but I definitely attribute my time growing up skating on the East Coast—in the mid ’90s—for the way we approach the creative. For decades, skaters have always been influential with their art, film, music, and fashion. For me, motion graphics was just the next expression of art and so I’ve taken that “skater” mentality into other industries that we work with. I know it’s cliché, but as skaters we really do look at the world differently.

How did you link up with Cariuma for the Berrics collab ad that launched today?

I had been seeing Cariuma all over the place. And I mean… EVERYWHERE. They seem to be playing social media chess while everyone else is playing checkers! And that’s smart. Especially in a pandemic when people are stuck at home on their phones, computers, smart TVS, etc. They’ve done something to crack the algorithm, so shout out to their team! All that said, they were on my radar of brands I’d like to work with. Ironically, they found us!

How does the 2021 forecast look for ABC?

We have a lot of fun work in the oven right now. Thankfully, we’ve managed to stay creative in the midst of all the chaos; I think it’s been an outlet from all the negativity. We’re thankful to all our clients for keeping us fed during the pandemic, and stoked to be part of this Berrics x Cariuma collab!

Learn more about Already Been Chewed here. Watch some of Damer’s skate footage, including clips filmed at The Berrics, below:

This must be a dream scenario for many flatground aficionados.
Aug 1, 2022    0 Comments
Events

The show, based on the 2005 movie written by Stacy Peralta, will air on IMDB TV. (Image courtesy Everett Collection.)
Jan 8, 2021    0 Comments
Skateboarding 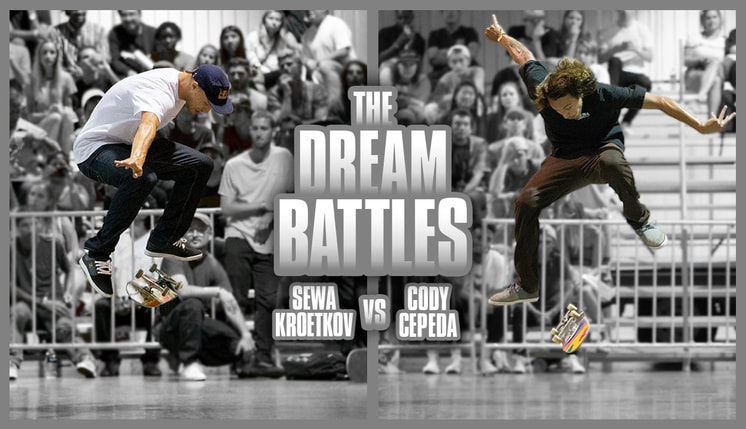 This Is How Rune Glifberg Designs His Innovative Skateparks