In his original 1977 review of Star Wars, Roger Ebert compared watching the film to that of an “out-of-the-body experience,” where he was so sucked into the film’s world and story that the critical, analytical side of his brain went quiet. And all throughout my life, no matter who it was that I discussed the saga with, I’ve never quite heard someone describe the feeling of watching a new Star Wars movie as well as Ebert did then.

Star Wars is the closest thing that cinema has to its own original, timeless piece of mythology, one that—upon analysis—holds the same weight as any classic book or piece of music. Because it’s held that kind of status for as long as it has though, it’s easy to talk about the power it holds in an almost nonchalant fashion, as if the franchise never earned that kind of respect or popularity in the first place. However, to be fair, the franchise’s much-maligned prequel trilogy contributed heavily to that attitude.

All of which is to say that, while The Force Awakens may have shared too many similarities to the plot of A New Hope for a large portion of Star Wars fans, what the J.J. Abrams-directed seventh installment was successful in doing was reminding the general masses of the power and heart that these films can achieve… when done right. The Force Awakens didn’t accomplish this solely through its commitment to practical effects or its many action sequences, either, but through the introduction of new characters that felt refreshing, three-dimensional, and believably alive in this beloved galaxy far, far away.

Yet, if The Force Awakens had provided the much-needed kickstart that the Star Wars franchise was in desperate need of, then writer and director Rian Johnson’s The Last Jedi had the sizable task of crafting a follow-up equally as compelling and entertaining. Fortunately, Johnson has responded to that challenge with the most emotionally complex and daring Star Wars film to date.

Picking up where The Force Awakens left off, The Last Jedi takes the same structure as the franchise’s most acclaimed installment, Empire Strikes Back, by pairing off its main characters and sending them on their own missions. Most notably, that includes the meeting and possible training that takes place between Daisy Ridley’s Rey and Mark Hamill’s older, haunted Luke Skywalker.

At the same time, The Resistance and The First Order are clashing in a more intense and challenging way than they ever have before, as the film’s Resistance heroes, Poe Dameron (Oscar Isaac), Finn (John Boyega), General Leia Organa (Carrie Fisher), and the fresh-faced Rose Kito (Kelly Marie Tran), fight for their very survival. Meanwhile, on The First Order side, Kylo Ren (Adam Driver) and General Hux (Domhnall Gleeson) are hell-bent on crushing their shared enemy, and therefore, keeping themselves in the good graces of their Supreme Leader Snoke (a motion-captured, malevolent Andy Serkis).

That’s a lot for one film to try and take on, which accounts for The Last Jedi’s two-and-a-half-hour total runtime, but the film manages to deftly alternate between each of its subplots with a deceiving ease. And even with the film’s many awe-inspiring action sequences, The Last Jedi goes out of its way to firmly keep every single one of its large-scale sequences and twists closely linked to the individual arcs of its characters. Make no mistake: The Last Jedi feels, at times, bigger than any Star Wars movie that has come before it, but that doesn’t stop the film from making sure to keep everything character-oriented.

That likely won’t come as much of a surprise for those who have watched any of Johnson’s previous films, like Brick, The Brothers Bloom, and Looper, or his Breaking Bad episodes, for that matter, where his ability to craft dense, complicated, but satisfying narrative experiences has always been present. With The Last Jedi, he’s managed to prove himself to be an adept cinematic storyteller once again. And, thanks to the work of cinematographer Steve Yedlin, Johnson has created some of the most visually-stunning sci-fi fantasy imagery of recent memory.

While the film adopts the same structure as Empire as well, Johnson goes out of his way to keep The Last Jedi from ever being too dark. Although sometimes unnecessary, the film’s humorous moments are mostly effective and help to breathe welcome energy into some of the film’s otherwise quieter, darker moments. And, in case those kinds of tonal jumps may seem like a tall order for Johnson to ask of his actors, which is sometimes evident in the film’s first half, most of them manage to rise to the occasion. Standout cast members include Laura Dern, Oscar Isaac, John Boyega, Adam Driver, and the late-great Carrie Fisher, who closes out her cinema career with one of her finest performances.

As had been previously rumored, too, Mark Hamill shines as Luke Skywalker, who has grown endlessly more complex and conflicted than he has ever previously been, which Hamill manages to sell every aspect of. Luke will no doubt be the character that fans of the franchise go into the theater most excited to see this weekend, and The Last Jedi more than delivers when it comes to its treatment and depiction of Luke, no matter how surprising or unexpected some may find it to be.

With Johnson serving as the caretaker of it all, the film’s various gears and parts are able to work together with near-perfect functionality. His screenplay for the film is nuanced and ambitious in a way that some may be taken aback by, before they’re then forced to try and stifle their own shocked gasps, caused by the film’s consistently subversive, surprising turns. The film takes the many questions fans had left over from The Force Awakens, and uses them to spin a tragic, emotional, and sometimes inspiring narrative.

So, even though some will accuse The Last Jedi of being too long, the film’s patient approach to its pace results in some of the most genuinely satisfying moments of payoff that this franchise has ever seen. It unfolds with a careful precision, unveiling new layers as more time goes on, until it achieves a crescendo two-thirds of the way through unlike anything that most contemporary blockbusters are ever able to reach. What’s even more commendable is how The Last Jedi is able to maintain that same cinematic high for the rest of its considerable runtime, right up until its final few notes, which ring with the kind of emotional honesty that we very rarely see from spectacle filmmaking nowadays.

The film had such an effect on me, in fact, that there was a brief spell when I forgot anyone else was in the theatre with me. As though I was watching these characters all on my own, connecting to and fighting right alongside them. A reminder of what Star Wars, at its very best, is able to tap into.

Star Wars: The Last Jedi is set to hit theaters on December 15. 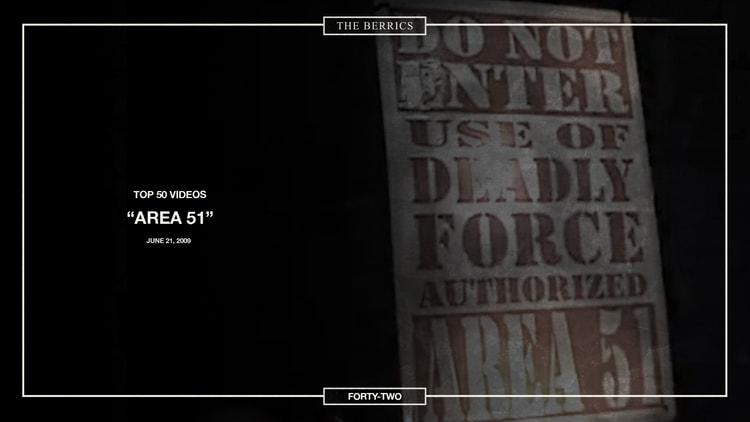 As a cutting edge media company, it’s always been a struggle for us to hang on to interns. This ill-fated trip to Roswell, New Mexico, is a case in point: we wanted to probe the possibility of ali...
Dec 12, 2017    0 Comments 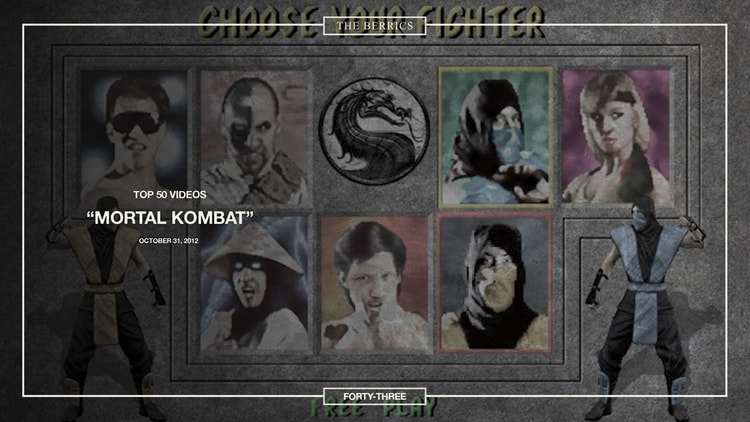 Halloween edits are a great way for our videographers to experiment with storytelling—as long as they can cover the cost of costumes and fog machines. Chase killed it with this edit, an homage to...
Dec 12, 2017    0 Comments 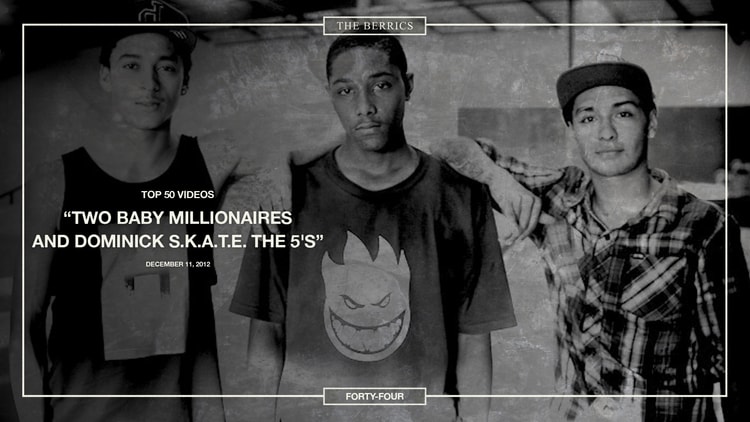 When three kings are playing a game of S.K.A.T.E. you should be wise enough to just grab the camera and start recording. They’re traversing stairs and bearing gifts—get those clips!
Dec 12, 2017    0 Comments 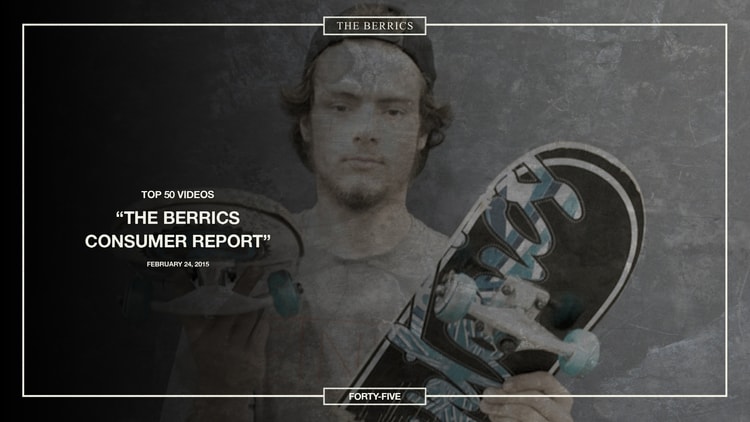 This concept started as a PSA to only buy legitimate pro-quality skateboards, then it evolved into a showcase for some of our favorite Berrics regulars to show how versatile they are. Even when th...
Dec 12, 2017    0 Comments 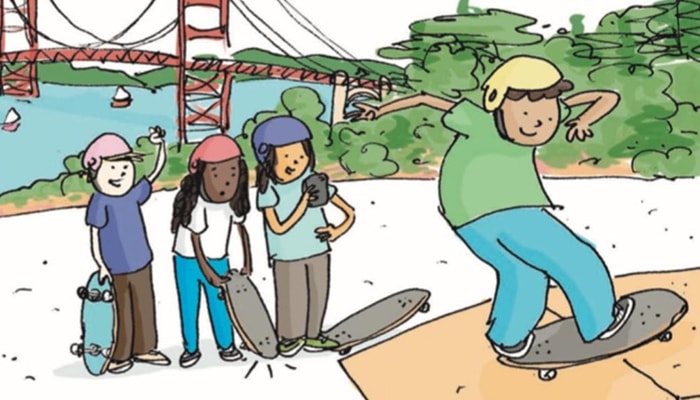