Ever since the ’90s, the founders of OC Ramps have been reimagining what is possible with backyard ramps and mobile street obstacles. In fact, the ramp design company has masterminded such a wide array of skatespots, both public and private, that there is not much that it hasn’t already tackled. OC Ramps’ upcoming ‘Billionaire Beach’ project is just the latest in a long string of collaborations that the brand has embarked on with The Berrics and, with a miniramp built on the beach, the video is typically outside-the-box. Envisioned as an homage to Almost’s shared video project Cheese And Crackers (starring Daewon Song and Chris Haslam), Friday’s video will feature two of the world’s most adept mini-transition skaters: Cody McEntire and Dave Bachinsky. (It will premiere on our site at 8:00am PST.)

OC Ramps has built the obstacles for TJ Rogers’s 2019 Battle Commander, our 2013 Kenzo Kalifornia bag release party, and many more events over the years. If you’re looking for a perfectly crafted ramp made with high quality materials, visit the OC Ramps site!

Watch some of our extensive work with Bachinsky and McEntire, below:

A lot of spots in Long Beach were unlocked during their test run. Watch the video here!
Jun 29, 2022    0 Comments

For peat’s sake, Orwellian World Landscape gives you moor than you bargained for in this video.
Nov 16, 2020    0 Comments
Skateboarding 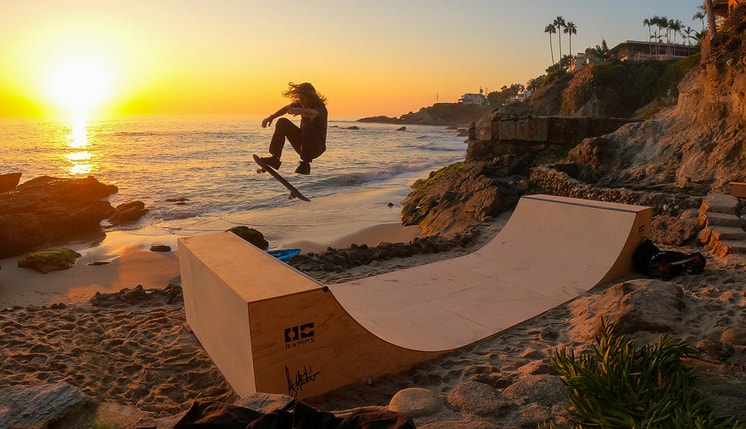 The L-shaped bowl in the tiny seaside town of Cayucos is covered in Skatelite… and did we mention “free”?
Nov 13, 2020    0 Comments
Skateboarding