Centuries ago in 776 B.C. when the Ancient Greeks formed the first Olympic Games on the plains of Olympia, they had no idea almost 3000-years later skateboarders would be up in arms over our inclusion into the 2020 Summer Olympics. We must ask ourselves when looking back 20, 30, even 50-years from now, will our own skate history approve or disprove of our reactions? Maybe we’re blowing this way out of proportion, or maybe (for better or for worse) it’s a lot bigger than we think. Either way, after skateboarding’s official announcement into the 2020 Summer Olympics last Wednesday, August 3rd, important questions have been asked. Are skateboarders athletes? Has skateboarding officially sold out? What does the Olympics really mean for skateboarding? We sat down with Sean Malto and Steve Berra to gain some perspective on the important questions surrounding this debate.

What are your initial thoughts on skateboarding being included in the 2020 Tokyo Summer Olympics?

[Malto] My initial thoughts are it’s crazy. Then my second thought is, how’s it even going to work?

[Berra] Yeah, I don’t think they’ve quite figured that out yet.

[Malto] Is it like who can do the most flip tricks?

[Berra] Is it big air? Is it Street League style? X-Games?

[Malto] I know snowboarding is “spin to win,” [laughs]. But I don’t know about that with skating. Who knows? It’s weird, there’s no real governing body in skateboarding.

[Berra] Yeah, skateboarding is such a subjective thing it will be interesting to see how it plays out.

What does this mean for skateboarders? Do you think the Olympics will grow Skateboarding?

[Malto] I think it’s going to put skating on a level where more people will see it. I think there’s a ripple effect. What do you think Steve? Do you think more eyes will be on skating?

[Berra] People have to understand it’s one contest every four years, right?

[Berra] If you look at Archery, is Archery any bigger because it’s in the Olympics? It’s a roll of the dice if whether or not skateboarding in the Olympics is going to make it bigger or not.

[Malto] In that sense I guess it affects the skaters in it more than the skater at home.

[Berra] Look, here’s what I think: There’s going to be a few people that benefit really heavily off of it and then the rest of the skateboarding world is going to continue to go the way it’s always gone while it’s up to the industry to make sure skateboarding isn’t taken away. Which is what you hear in all of these negative comments. In reality, the Olympics doesn’t have the ability to actually steal skateboarding away from us skateboarders.

[Malto] I always thought that was funny when people are like, “The Olympics ruins skating, I’m over skating.” Like really? You’re going to let the Olympics ruin it?

[Malto] It’s like, I thought we all got into skating because we love skateboarding? I wouldn’t let something else affect how I feel about what I love to do.

[Berra] Right… That’s some armchair skaters I think right there.

[Malto] I guess that’s people focusing on everyone else and not themselves, [laughs].

It shouldn’t make a difference… Right?

[Berra] I look at it too as an opportunity for these guys. I mean, who wouldn’t want to experience the Olympics? It’s one of the most important sporting events in the world.

[Malto] Don’t you get to go to the Whitehouse and meet the president or something, [laughs]?

[Berra] But which President? Who you voting for Sean? [laughs].

What are your responses to critics who say the Olympics alienates us from skating’s core values? From our operating outside of society and our DIY mentality?

[Malto] Skating is what you make it.

[Malto] And what you want out of it. Obviously, skating is an individual thing, it’s about your personal creativeness or what you want to call it, so people are going to disagree with others on everything no matter what. So, you shouldn’t let skating in the Olympics ruin what you’re doing.

[Berra] I agree; I don’t think it makes a difference. I don’t understand why people are so afraid of it. I can sit here all day long and complain about the Kardashians, but all that does is take away from the time I could be using to create something I think is particularly better. Complaining doesn’t get you anywhere.

[Malto] Yeah, it’s not like the Kardashians are personally hurting you, [laughs].

[Berra] It’s not like the popularity of the Kardashians is preventing me from doing anything that I do in the world.

[Malto] Did you just compare skateboarding in the Olympics to the Kardashians?

[Malto] We’re just going to keep doing our thing and if the Olympics crosses that path, then fuck it.

[Berra] It depends on what skater you’re talking about. I think traditionally skaters haven’t really considered themselves athletes because it’s also so much their lifestyle and the term athlete is so closely associated with jocks and jock mentality and traditional sports. But I don’t know man, some of the things I have seen recently from these guys who don’t call themselves athletes, they look like bigger jocks than some of the guys on my football team where I went to high school. I don’t know why there’s a certain consortium of skaters who don’t want to call themselves athletes. Skateboarding to a guy that does it at a level that professional skateboarders do it at are one-hundred percent no doubt athletic and therefore could be categorized as an athlete.

[Malto] I think you could categorize skaters as athletes or whatever you want.

[Berra] All it is, is an easier way to describe skaters.

[Malto] Yeah, totally. I wouldn’t necessarily tell somebody I’m an athlete because skating is more than just being athletic. It’s a part of our whole life, outside of even being on a skateboard. Athlete is just a word to describe somebody. I wouldn’t be mad if someone called me an athlete, even though I wouldn’t personally call myself one.

[Berra] You know I used to go to these Hollywood parties with my ex-wife and when she told people I was a professional skater they would say, oh cool – you’re a figure skater?  That’s crazy I have never met a figure skater.

[Berra] See, those are the kinds of people you are dealing with when you tell someone skateboarders are athletes. You have to use this language sometimes, but that’s just something that revolves around people’s minds who are not in skateboarding. There’s no point in getting upset or arguing over the fact that a mainstream person who doesn’t know anything about skating says: “Look at that guy [skateboarder] he’s a great athlete.” Because they are a great athlete.

[Malto] Definitely, you’re just explaining to someone who doesn’t know about skating. It’s just a word.

What about those people complaining skateboarding has officially sold out? Or that skateboarding being in the Olympics is all about the money?

[Berra] Everything is about the money, what the fuck is anyone talking about. You don’t start a business to go broke. Any person who says, I have a dream to have a t-shirt company, why? So they can make money, why? So they don’t have to sell insurance. There’s no reason why a kid skateboarding shouldn’t be able to make money, especially someone who is good at it and whose ability is better than other professional athletes making 100 times more than the top pro athlete in our business.

[Malto] Listen, we didn’t get into skating thinking “We’re going to make money.” We all love skating for different reasons and there’s different reasons why we all skate every day. For me personally, if someone wants to pay me to ride a skateboard and I can just skate way more often and for the rest of my life… I’ll take that, [laughs]. Right? It’s like, hey do you want to skate more or go get a real job and skate half the time? Of course I am going to take the option of getting money to skate more often. It goes back to skateboarding is what you make it, you get into it for whatever reason and everyone is always different.

[Berra] Right, and it’s not like we’re here to dictate.

[Malto] Skating got to a point where it’s so big everyone thought it was cool, and it is cool, [laughs].

[Malto] And people got stoked on it and people buy the product, it’s a business.

[Malto] You know it’s one of those things where if everything was free and we all worked together and you could live and eat for free and didn’t need money to live, cool. But it’s just not how the world works. I wish it wasn’t like that but people have to make money to survive. You need to make money that’s just the way it is.

[Malto] Or anything else for that matter, [laughs].

[Malto] I’d rather make money skating than doing anything else.

_[Berra] _And look, people were making money off skating far before Sean or I or any of those people who are rejecting skateboarding being in the Olympics. Before they could even have that opinion or argument people were making money off of skating. So, of course we’re going to try and make money growing up off of skating. What are we supposed to say? “No, I don’t want to support myself, I don’t want your cash? I’m going to skate in your contest but if I win don’t give me the money because this is not about the fucking money man,” [laughs].

[Malto] Making money in skating means you can skate more often, eliminating that part time job you have to have.

[Malto] I’m fortunate enough to where when I started skating I was young enough to make enough money to where I never had a real job before outside of skating. And you know what? I never want a real fucking job outside of skateboarding, [laughs].

[Malto] I’m going to try my hardest to only have to skate for the rest of my life.

[Berra] Isn’t that everyone’s dream? Does anyone not get into skating and dream about being a professional?

[Malto] I think if you ask any skater what do you do? And they’re like: “All I’ve ever done is skated for my whole-life.” You’re going to be like, “Damn, that’s badass,” [laughs]. “That’s what I want to achieve.”

[Berra] Totally, I agree, [laughs]. And I’m almost there. I’m just a few birthdays away from 80 so you can ask me and I can say that.

[Malto] Yeah, [laughs]. Steve was making money off of skating “waaaay” before I was alive.

[Malto] Is that true? Were you making money 26-years ago?

[Malto] You sure? When did you start getting paid off skateboarding?

[Malto] You know where I heard it? I was at Pizzanista today and someone was like, “Hey skateboarding is in the Olympics.”

Well thank you guys I really appreciate it. Anything else?

[Malto] The Olympics… It’s a go I guess. 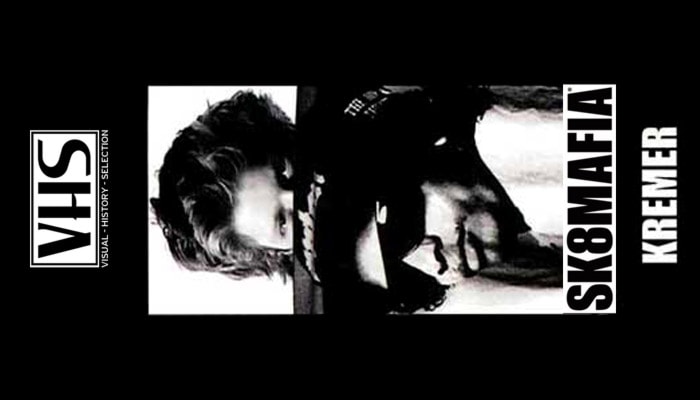 Visual: of or relating to seeing or sight History: a continuous, typically chronological, record of important or public events or of a particular trend or institution Selection: the action or fac...
Aug 11, 2016    0 Comments 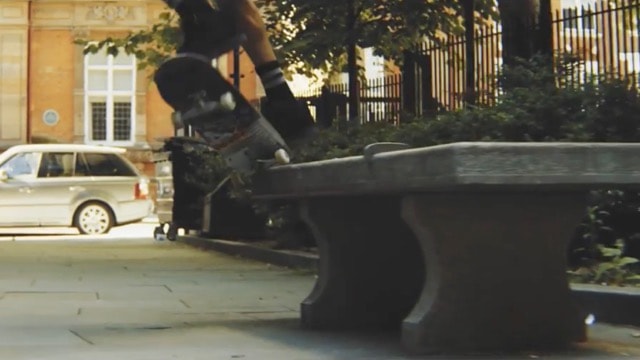 BREAKS Mag caught up with Lucien Clarke in London to talk about supporting his mother through skateboarding. Now that’s living the dream.
Aug 11, 2016    0 Comments 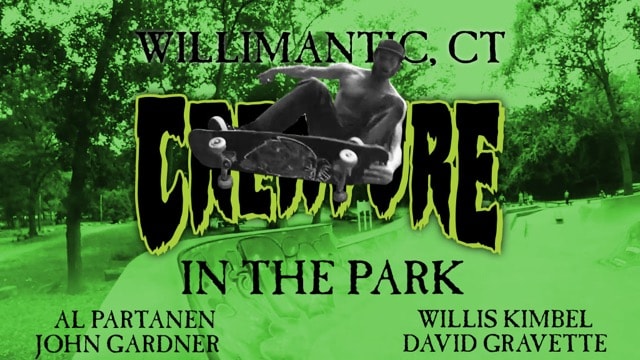 Creature In The Park — Willimantic, CT. 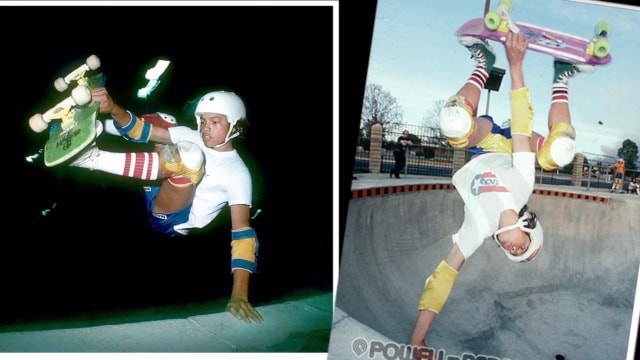 Jeff Grosso narrates the complete history of skateboarding trucks in his latest episode of Loveletters to Skateboarding. Presented by Vans.
Aug 11, 2016    0 Comments 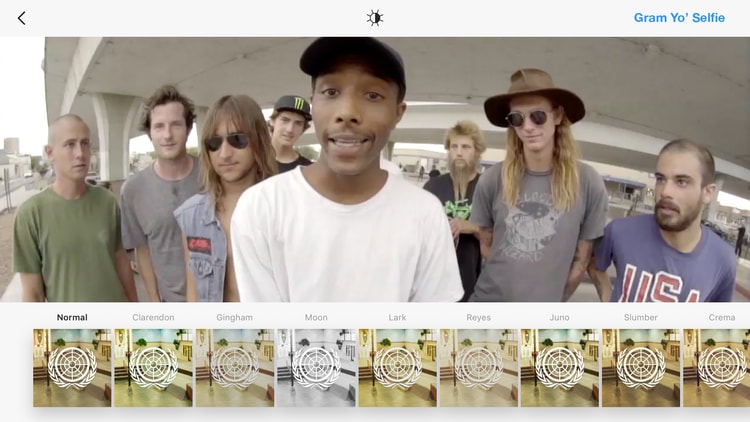 GRAM YO SELFIE — with Element in Boise, Idaho

Element Skateboards and Blood Wizard did a Gram Yo Selfie at the Element demo in Boise, Idaho. Hardflip indy grabs, party bowl lines and Westgate launching over the whole team, you guys punched in...
Aug 11, 2016    0 Comments
Load more
The Berrics © 2007-2020