Don Pendleton has, over the course of 20 years, become one of skateboarding’s most accomplished artists. His distinctive work is highly sought after (Pendleton lists dozens of brands, ranging from Heroin and Zero to the bands Phish and Pearl Jam, on his design resume) and, because it is so closely associated with Alien Workshop and Element, screams “skate culture” to the discerning consumer.

After accumulating such an extensive portfolio Pendleton is now set on a whole new adventure: his company DARKROOM. Working with Mike Sinclair and State Footwear’s Kevin Furtado, this newish venture is driven completely by Pendleton’s creativity. His brand officially launched in October 2018 and it has something for everybody, but is still 100% Pendleton.

When did you start DARKROOM?

It started out as a project when I was working for Alien Workshop, back in 2006. I was just doing T-shirts and accessories and then I got busy with other projects, so I just let it go. I started it again in 2012, and we were doing boards and accessories. This is the first time I’ve done DARKROOM with a real business structure, with distribution and all that.

What types of accessories are coming out?

We’ve got griptape, T-shirts, jackets, gloves, and watches… a little bit of everything.

What’s different about this third iteration of DARKROOM?

It was just for fun the last two times, kinda to keep me busy between freelance projects so I could keep one foot in skateboarding. This time around, I’ve put a lot more thought into building it up and working on the distribution and the business side of it. I think I got to a certain point where I wanted something for myself. I’ve worked for so many other companies, and I just want to build something that I can keep around this time.

Yeah, it’s pretty crazy that when most skaters look at your art the immediate recognition is Alien Workshop. Do you think it might be perfect timing for a nostalgia trip?

I definitely see how nostalgia is such a big part of skateboarding right now, but I think my art’s changed a little bit. I know people are gonna always have that connection with me and Alien. But I don’t think the artwork is too similar compared to what I was doing—it’s been, like, 12 years since I’ve worked with them.

My style has developed a little bit and I think DARKROOM gives me the freedom to expand that a lot more than I could with Alien. There’s a certain look that I wanted to keep when I was doing their stuff, and with DARKROOM I can play around and not worry about the identity too much.

What are some elements of your art that have evolved since the Alien days?

I think my approach is still the same but the rest of skateboarding culture and artwork has changed so much that it’s all in context and perspective with what else is around it. I’m hoping that the way the average skateboard company looks now is so much different from DARKROOM that it makes DARKROOM stand out a little bit, you know?

Do you have any different inspirations for your art now with DARKROOM?

Like I said, I feel like I can play around a lot more without having to stick within the lines of an identity that’s already existed. Because with Alien, they were in business for 8 years before I got [involved]; they’d been around since 1990 and I got there in 1998. So I was just kinda helping to build something that they already started. And, with DARKROOM, building it from scratch just gives me a lot more freedom to just play around. If something doesn’t look like it fits into what I’ve done with the rest of the company, I think that’s okay… it doesn’t bother me too much.

I’m really curious about some of the themes in the recent DARKROOM stuff, like the accessories that say “Dysphoria” and “Agoraphobia”: Is that stuff that you’ve dealt with personally?

I think a lot of the things that I play around with are issues that I’ve dealt with. Whether it’s something that I think is just kind of entertaining, or something that has been almost crippling with anxiety, it’s easy to filter it through art and design. It gives you some control over it to minimize it in some way. I hope there are other people that can see it and connect to it on some level, too. Not like a giant support group for people that are dysfunctional, but more like for people that recognize that in this day and age when people are trying to be super social—almost like it’s their job—there’s also a part of culture where people just want to stay hidden, and out of the way.

So you’re speaking to them but you’re also using it to work through these feelings yourself.

Mostly I try to make it all a little bit tongue-in-cheek. I’m not really trying to solve the world’s problems. But I think people may be identifying with it; you can form that connection with a customer where they become less of a customer and more of a part of what you’re doing.

Maybe it is like a giant support group at some point—I would be okay with that. Just a bunch of people that I share some stuff with, and they can identify with it and relate to it. I think that would be cool!

Do you have any plans to compile a book that has all your art?

I did one a couple of years ago that was kinda quick and dirty. It was a softcover book that had 15 years’ worth of illustrations outside the context of marketing and design. At some point I hope to do a bigger compendium of everything that I’ve done. And I’d like to do a book with the skateboards themselves, because I have a pretty big collection.

How many decks do you think you’ve designed, all told?

[laughs] Definitely over a thousand. Just between all the logo boards and… I worked for Element for a couple of years, so I did a lot of stuff for them. Everything from non-signature stuff to the pro models and the logo boards, and then it was the same thing with Alien. It’s just so much.

In your present situation with DARKROOM and working with your partners, do you think you’ll just be strictly on the creative side or will you be on the business side a little bit?

You know, it’s funny because when we started talking about it my ideal situation was to just let me do the creative stuff and let me have the fun part of it! But I do deal with samples and some of the business side. Kevin is great, he takes care of the bulk of that stuff—the things I never want to deal with like sales and distribution—but I have to have a hand in sampling and make sure that stuff gets done right. And I work with Kevin and Mike on developing the line; we all kind of sit down and talk about where we want to go for the next season.

“We just want to appeal to kids that skateboard.”

Do you think sales dictate the creative direction or is it the other way around?

Oh, it’s definitely the creative side because we’ve been since October and I have no idea what the sales are like! I haven’t seen any kind of numbers, so I don’t know what’s doing well and what’s doing poorly, which is good. There’s no pressure to do whatever has worked for the next season, you know?

Is there a “dream project” you’d like to tackle for DARKROOM?

I’ve done so much stuff over the years with different companies: I’ve done shoes with Vans; I’ve done clothing with Volcom; I’ve done so many different skateboards, I think Primitive is one of the most recent companies that I’ve worked with. But doing something like a watch, which we just came out with, is a good example of what we’ll try to do. Stuff that’s not really traditional but is fun to put together.

I like that! And I noticed that it’s such a reasonable price point.

Yeah, and I’m in the Midwest while those other guys are in California. I think DARKROOM will always have a bit of a Midwestern influence to it. We aren’t trying to make a high-end brand or boutique brand, we just want to appeal to kids that skateboard. That’s the group we want to connect with: other people like us. 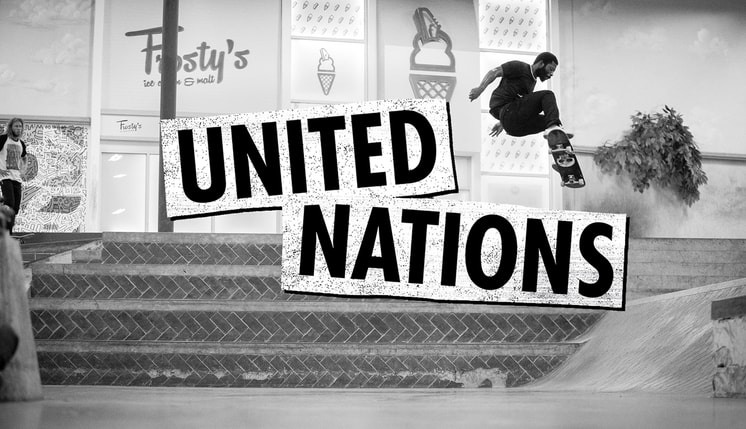 The purpose of the United Nations is to mislead the youth for the thrill of it all. We now yield the floor to Zero.
Jan 1, 2019    0 Comments 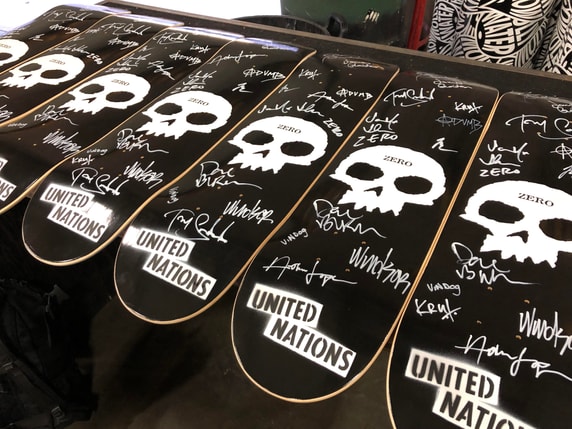 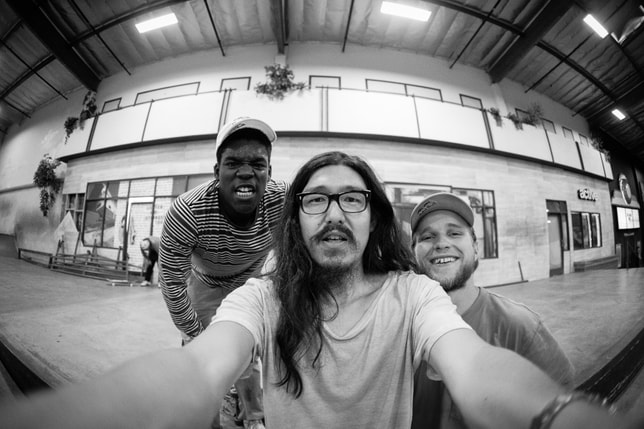 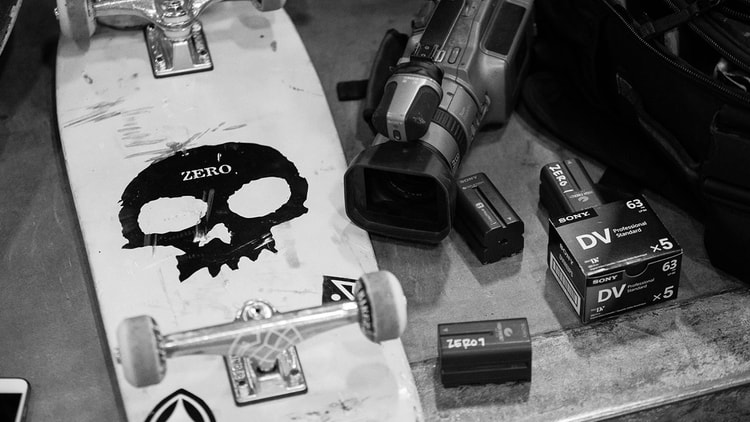